Berge Sarstein was delivered on 1 March 2017 at 0858hrs (JST). She departed the Hiroshima Shipyard at 1200hrs and made her maiden voyage to Newcastle in Australia, where she would transport coal to Map Ta Phut in Thailand.

The delivery of Berge Cho Oyu followed shortly after at 1238 hrs (GMT+8). She was the third in the series of four VLOCs built at the GSI Long Xue Shipyard in Guangzhou, China, adding another 262,000 DWT to our fleet. Similar to her sister vessels, Berge Cho Oyu will operate on the routes between Australia and China. 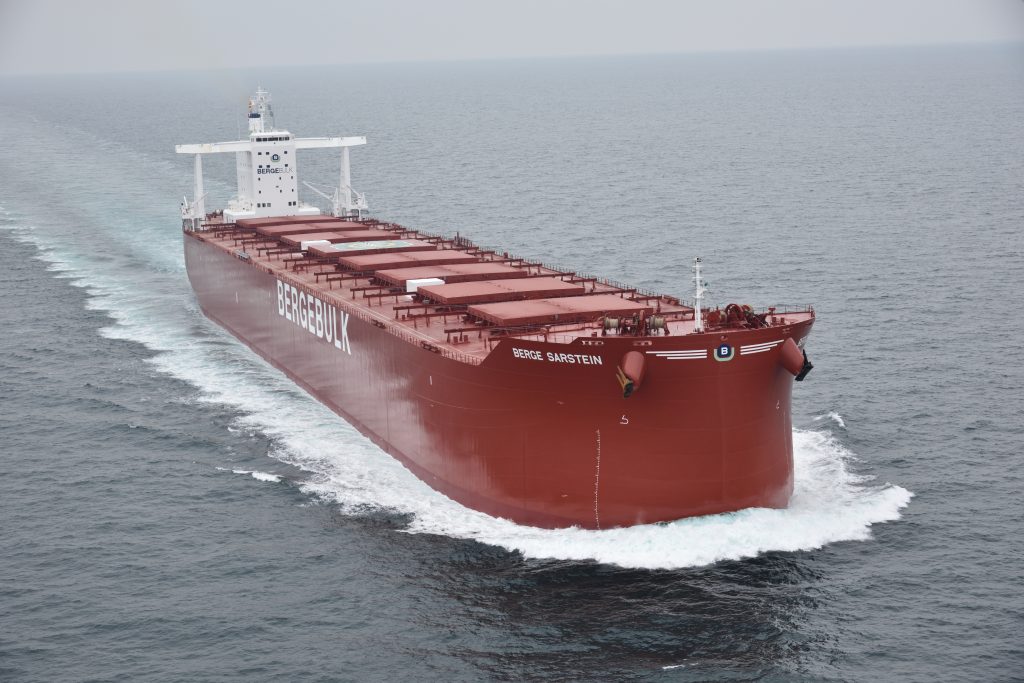 Built by the Imabari Group in Japan, Berge Sarstein was equipped with a new deckhouse and several mechanical improvements that contribute to her sleek features. The new deckhouse, known as the ‘Aero Citadel’, is designed for optimal aerodynamics, has improved anti-piracy measures whilst providing luxurious accommodation for crew. Its slim, streamlined shape helps in reducing wind resistance in head winds.

Other improvements include the installation of an energy-saving device known as the ‘Weather Adopted Duct’. The thrust generated by this duct increases propulsive efficiency and this, along with  ‘Hybrid Fins’ attached to the rudder to reduce rotational losses from the propellers, help to further improve efficiency. Fitted with newly improved hull lines and a modern, straight stern, Berge Sarstein is able to carry slightly more cargo. She is also the first in our fleet to be equipped with a chemical-type Ballast Water Treatment System.

Berge Sarstein was officially named on 2 November 2016 after Mount Sarstein in Austria. The mountain is elevated at an impressive 1,975 metres above sea level and is known to be a challenging climb due to its very steep slopes. Berge Cho Oyu was installed with ‘ENSaver’, an energy monitoring software that provides a dashboard overview of all vital sensors to ensure the vessel runs on optimum parameters. The software also analyses and indicates the impact of weather and hull on the movement of the ship, which enables us to assess and continuously manage her energy usage. Her main engine is highly efficient, with exhaust gas boilers installed in order to recover waste heat from the main and auxiliary engines. As with all our recent new builds, she was equipped with a Ballast Water Treatment System to prevent migration of invasive aquatic species in the vessel’s ballast water.

She was named after Mount Cho Oyu, a mountain located on the border of Tibet and Nepal about 20 kilometres west of Mount Everest. At 8,188 metres, Cho Oyu is the sixth highest mountain in the world but is widely considered to be one of the easier peaks to climb.