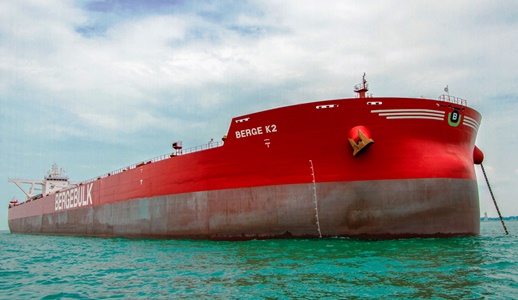 Berge Bulk welcomed its 262,000 DWT vessel, Berge K2 to its fleet. Built at Guangzhou Shipyard International (GSI) in Longxue, China, the vessel was delivered on 29 September 2015. She is the first in a series of four Berge Bulk sister ships to be delivered from GSI over the coming two years.

Berge K2 was fixed on a long-term Contract of Affreightment with Berge Bulk’s customer BHP Billiton. She would mainly travel the route between Port Hedland in Australia and China under the flag of Isle of Man.

As part of Berge Bulk’s ongoing ‘Blue Matters’ environmental campaign, Berge K2 and her sister ships were fitted with a variety of eco-friendly equipment. This includes a rudder bulb and Samsung’s new energy monitoring software “ENSaver”. The software provides a detailed dashboard overview of all vital sensors, generating comprehensive data on the ships’ energy and fuel consumptions. This further improves Berge Bulk’s ability to ensure its ships run on optimum parameters, bringing the fleet closer to ISO 50001 environmental standards.

Berge K2 was also equipped with latest engine technology. In fact, the vessel’s Main Engine is so efficient that waste heat produced is no longer sufficient to keep the accommodation and fuel oil warm. Berge Bulk thus installed exhaust gas boilers which recover the waste heat from the two Auxiliary Engines as well. Named after Mount K2, the second tallest mountain in the world (a peak of 8,611 metres above sea level), it sits on the border between Baltistan in northern Pakistan and Xinjiang in China.