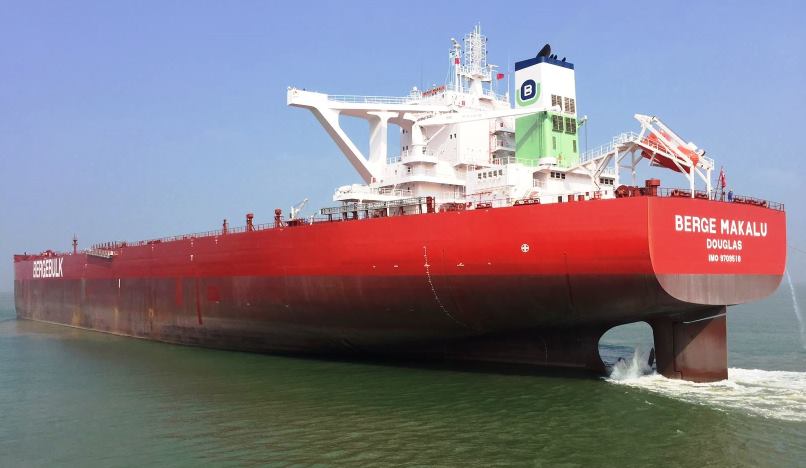 With sister ship Berge K2 in operations on her route between Australia and China, we were excited to welcome Berge Makalu (262,000 DWT) to our fleet.

Built at Guangzhou Shipyard International (GSI) in Longxue, China, Berge Makalu was delivered today, 5 January 2016 at 11.43 hours China local time. The vessel is the second in a series of four Berge Bulk sister ships to be delivered from GSI over the coming two years.

Like her sister ship Berge K2, Berge Makalu sails under the flag of Isle of Man for Berge Bulk’s customer BHP Billiton, carrying 134,693 m3 of gross tonnage in five cargo holds on the route between Australian Port Hedland and various ports in China.

As part of Berge Bulk’s efforts to minimise its impact on the ocean and the atmosphere, Berge Makalu and her sister ships were pilot to Samsung’s energy monitoring software “ENSaver”, which provides a dashboard overview of all vital sensors to ensure the ship runs on optimum parameters. The ore carrier’s MAN B&W’s super-long stroke main engine is tuned for low load and, along with a rudder bulb, increases energy efficiency. In fact, the vessel’s main engine is so efficient that exhaust gas boilers had to be installed in order to recover waste heat not only from the main engine, but also from both auxiliary engines.

Berge Makalu was named after Mount Makalu, the fifth highest mountain in the world with an elevation of 8,462 metres (27,765 feet). It is an isolated peak in central Nepal, just 22.5km (14 miles) east of Mount Everest.