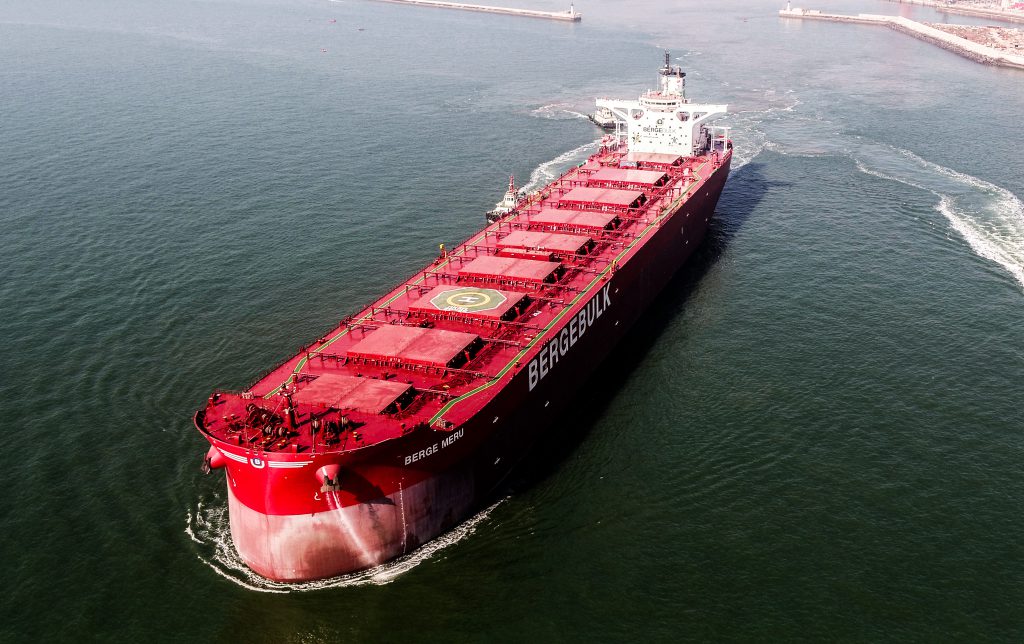 Berge Meru is the eighth ship in Berge Bulk’s series of large bulk carriers. The vessel is equipped with new features that set her apart from her sister ships. She is equipped with a Direct Current (DC) system to provide less electrical distortion as the vessel operates. This addition also makes her better prepared for the retrofit of more energy saving devices on board.

The Berge Meru is also fitted with the world’s first FiTS2, which stands for ‘Flexible Integrated Turbocharging System for 2-stroke Engines”, a technology developed by ABB Turbocharging. The vessel’s engine has two of ABB’s A265-L-units, one of which can be shut down for low-load operation to save energy, even at relatively high engine loads. As the turbochargers’ valves can operate at high loads, a ship operating at low load on one turbocharger could immediately accelerate and the second unit would come on stream as the power increased. This flexibility could provide valuable support to vessels operating in areas where there is a risk of piracy.

The vessel is named after Mount Meru, a 6,660 meters high mountain in the Gharwal Himalayas. In 2011, the vessel’s Godfather, Jimmy Chin and his teammates, Conrad Anker and Renan Ozturk made history by becoming the first people to ever reach the summit of the central peak of Mount Meru. Considered the centre of universe in Buddhist mythology, as well as in Hindu and Jainist thought, the Shark’s Fin is the steepest and most demanding line to take up the Meru Peak.